This report has been compiled in accordance with Gender Pay Gap regulations using data as the snapshot date of 5 April 2020.

At this point, although the Company employed 486 people, the majority were on furlough and therefore the data refers to 36 “full-pay relevant employees”.

Our pay and bonus Gender Pay Gaps are as follows:

The proportion of females (blue) and males (orange) in each quartile pay band were as follows: 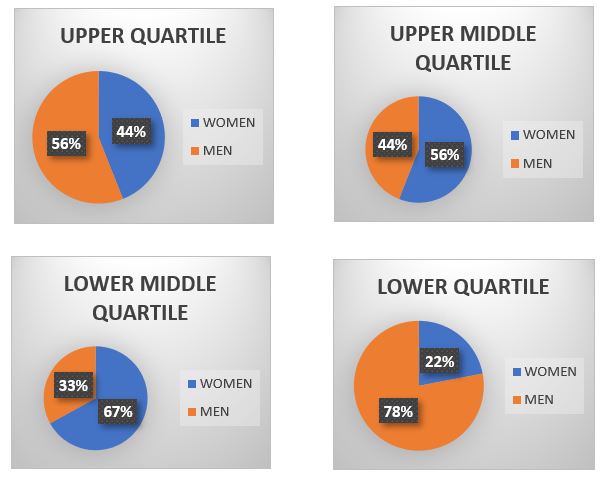 The mean gender pay gap narrowed by a further 4.65% and we have negative median pay gap of  -12.18%.
Only one person (male) received a bonus during the reporting period, which has resulted in a statistical distortion.

There are no differences in pay rates at any level for different genders occupying equivalent roles.

On the snapshot date, the majority of our employees were on furlough. Of the 36 “full-pay relevant employees”, 53% were male and 47% female.  However, the percentage of females would normally be much higher throughout the business which would affect the overall data; in particular the upper and upper middle pay quartiles would have a higher percentage of females.

I confirm this information is accurate at the snapshot date of 5 April 2020.